Automobile Fanatics
Home News Rivian Automotive’s R1T and R1S Made a Big Impression at the 2019... 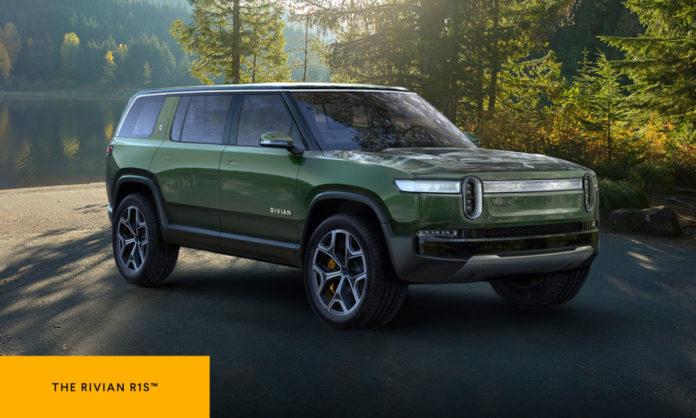 The Detroit, Michigan based automotive manufacturer Rivian Automotive made a big splash at this year’s New York Auto Show. After first bursting onto the scene at the 2018 Los Angeles Auto Show, New York gave the all-electric car company its best chance yet to show off key innovations.

We have some exciting things in store for our community of future Rivian owners. Until then, we’ll be over here reminiscing about our time together in NYC.

The Rivian R1S electric SUV and R1T electric pickup truck are American competitors that hope to go head to head with Tesla’s Model X. The R1S is larger than most electric SUVs coming to market with a body shape that is slightly reminiscent of older models of the Jeep Cherokee. The headlights of the R1S look a bit like a futuristic cartoon character.

All in all, the design language of Rivian is something along the lines of retro futurism. The Rivian R1T electric pickup’s long and slim rear lights looking almost unlike anything we’ve seen on a production truck though reminiscent of things from movies or video games.

Thanks for the warm welcome, NY! See you again soon.

On the inside, the Rivians are very luxurious and represent further evidence for a modern renaissance of American electric automotive design sophistication. Still very much prototypes, the Rivian truck and SUV concepts will be exciting to watch turn into full production vehicles.

Day one at the @NYAutoShow with #TeamRivian holding down the fort. Come see the #R1T and #R1S in person and meet the designers and engineers who bring our products to life. Here through April 28th. See you soon!

Rivian founder and CEO RJ Scaringe has been quietly entering a competition with Tesla’s Elon Musk to see which American automotive chief can be more bombastic. Musk clearly has the lead but Scringe is quickly showing promise in his unique way of bullishly rallying investors and hype to his new company.

Speaking with Business Insider, Scarginge was particularly optimistic about playing  the underdog: “It’s a balance between the advantages of having a tremendous amount of agility and speed and new technology without any of the handcuffs of legacy. That’s the positive of being a new company, but, of course, we don’t have the scale or the purchasing power or the capital, in terms of revenue, that an existing player might have.”

He believes that by being a new investment and operation, Rivian is not as restricted when it comes to employing new approaches and creativity to its production vehicles. Unlike firms like General Motors, Volkswagen, Daimler, or Ford, Rivian is not bogged down by the large bureaucracies and infighting that can make it so hard for larger car companies to move in sync together.

Spring is coming, but we’re in no rush. #R1S

When speaking about the performance specs of the Rivian R1S and R1T, Scaringe suggested that they would each have a fully electric range of over 400 miles. He has also suggested that this will be managed while carrying loads and offroad skills which are currently only possible by some of the world’s biggest gas guzzlers.

You're always one "yes" away from your next adventure. ‪#R1S‬

Each of these models should be able to accelerate from 0-60mph in under 3 seconds and are likely to be priced in the range of $60,000 after government incentives are factored in.

Rivian hopes its partnership with Ford will provide it the resources and foundation it needs to deliver its creative view of the future of electric mobility.