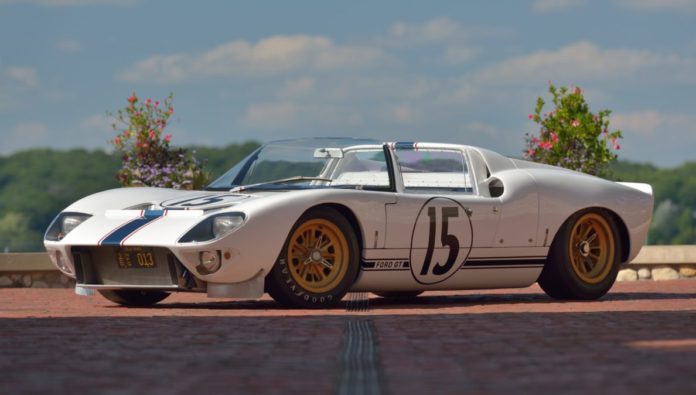 The 1965 Ford GT40 Roadster is one of the most legendary race cars of all time. A true Detroit classic, built with British expertise, for the express purpose of beating Ferrari at the 24 Hours of Le Mans Endurance Race, during its heyday in the 1960s.

For those unfamiliar with this storied chapter in racing history, the Ford GT40 went on to dominate Le Mans for four consecutive years, transforming Carroll Shelby into a household name, and igniting true automotive passions around the world.

Interested buyers will be pleased to know that the 1965 GT40 Roadster Prototype being auctioned by RM Sotheby’s in Monterrey, California between August 15th and 17th is one of the original test models that were built. It is also the only known example of a 1965 Ford GT40 Roadster Prototype which has survived to modern day in exquisite vintage form. Considered the best known example of its kind, this is a one of a kind opportunity to own a piece of American automotive history.

The Legendary History of this 1965 Ford GT40 Roadster Prototype

The 1965 Ford GT40 production was a limited run of 87 models whose serial numbers all begin with a “P”. Prior to this however, twelve models were built featuring a GT prefix designating that they are prototypes.The car being auctioned by Sotheby’s is the 8th out of these 12 original test models.

This prototype’s chassis number, GT/108, is considered one of the first five ever built, and the first of four to be constructed using a purpose-built steel roadster-specification chassis. This incredible 1965 GT40 Roadster is also considered the first ever to be built at the Ford Advanced Vehicles (FAV) production facility in Slough, U.K. after the departure of Lola’s Eric Bradley from the Ford GT design team.

Legend has it, this car’s ultra-rare roadster-spec chassis arrived at FAV around October 1964, and the architecture construction was completed on November 2nd of that year. In March of 1965, the prototype was paired with a Cobra-specification Ford 289-cubic-inch engine attached to a Colotti T-37 transaxle.

The car was then mounted to the very first roadster body, which was accented by Len Bailey’s signature design cues including a modified nose and raised rear-pillar intakes. The car’s exterior was finished in a race ready white and Borrani wire wheels (6.5 inches wide up front and 8 inches at the rear) were attached.

Finally in March of 1965, this Ford GT40 Prototype was tested at the Silverstone Circuit in Northamptonshire, U.K. John Wyer oversaw the test laps while Sir John Whitmore and Dickie Atwood enjoyed the car’s maiden voyages. When the prototype was finally delivered to Carroll Shelby’s Venice, California workshop for additional modifications, it retained it’s  original designation of GT/108.

Once in the hands of American master car builder Carroll Shelby, the 1965 Ford GT40 Prototype would eventually lead to the production of the Mark IV iteration of the race car that would go on to win the 1967 24 Hours of Le Mans Endurance Race.

It’s quite evident Shelby was particularly fond of the effort that went into creating cars like the 1965 Ford GT40:

“My proudest moments are beating Ferrari for the World Championship in 1965, and working with Ford to win Le Mans in 1966 and 1967.”

The Modern Provenance of a True Classic Car

After being used as a promotional display piece in various Ford dealerships and special events, in 1978, this GT40 prototype came to be owned by famed automotive trader Harley Cluxton who went on to sell the car to John Robertson of Big Fork, Montana. Johnson changed the car’s nose back to its original white color while also adding black Le Mans style racing stripes.

Cluxton then took ownership of the car again in 1983 before selling it to Tom Congleton of Mission Hills, Kansas. Congleton laid the groundwork which ensured this classic car was able to survive into the modem era. He completed a complete mechanical restoration while dedicating himself to retaining as many original parts as possible.

In 1992, the GT Roadster was sold again to a collector in the Pacific Northwest. In 2003 it’s mechanics were restored once more by Phil Reilly and Company in Corte Madera, California. After 22 years of safe keeping, the car was put up for auction in 2014.

Promotional material described the sale as: “The GT/108 is a great dual-purpose car. The open-roof ‘Roadster’ provides superior visibility and excellent ventilation, and with GT/108’s removable insulation, it provides the best conditions for both rally and vintage race car drivers to remain cool and enjoy all facets of the driving experience.”

Finally the current owner continued to maintain the prototype’s car and continued to exhibit the car at special events such as the 2017 Quail Motorsports Gathering and Pebble Beach Concours d’Elegance in 2018.

Sotheby’s describes Lot 252 which goes up for auction between August 15th and 17th in Monterrey, California with a reserve of $7,000,000-$9,000,000: “Ideal for further concours display or vintage event use, this important prototype roadster claims rarity and historical connections with several racing luminaries. It would crown most any sports car collection, offering an indelible component of the GT40 legend for Ford connoisseurs and Le Mans enthusiasts alike.”